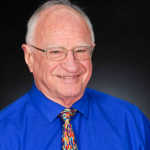 Dr. Libby is most troubled by the labeling of people, including prominent celebrities like former president Bill Clinton or Tiger Woods as “sex addicts.” “To say we are addicted to sex is just wrong,” says the therapist and licensed mental health counselor. “Sexual arousal can make us feel as if we might do something stupid or self-destructive. But the label most often leads to the wrong form of therapy.”

“It’s not sex that is causing the addiction, but the way an individual’s personality is manifesting his emotional or compulsive behavior around sex.”
— Dr. Roger Libby

So what about the compulsively afflicted, if not “addicted?” What are the implications of viewing online pornography? How does it affect relationships? Does it degrade our society’s moral fiber? Does it encourage (or reduce) illegal sex offenses in the real world?
In this interview, renowned research fellow, licensed mental health counselor, and distinguished Sexologist Dr. Roger Libby provides direct answers.
Q:  Dr. Libby, what are your first thoughts and concerns when you consider the way the Internet has made pornography so easy to access?
Dr. Roger Libby: It’s hard to talk about it generally because so much of it presents a distorted view of sex.  If you were using the Internet to observe our culture from another planet, you would get a completely distorted view about what sex is all about on planet Earth. It’s certainly not how you would want to teach sex education to young people.
Q:   What happens when a child is exposed to Internet porn?
Dr. Roger Libby:  It varies by age, but I would say that it can be confusing or even frightening to children if there is no other adequate, comprehensive sex education being provided by their schools or by their parents.
For example, in countries like Scandinavia or Holland, where you do have comprehensive sex education, it’s very different. If or when students run into sexual images online, they can place it into the context of what they learned in sex education. The effect is very different in this country where we have almost no substantive sex education.
Q:  What is the earliest age when sex education begins?
Dr. Roger Libby: It usually begins in elementary school, but it is very weak. In the early grades there is typically some segregation with the boys in one classroom and the girls in another.  Mostly, the sex education is about menstruation for girls.  It’s simply inadequate. As you get into junior high school and beyond it is neither comprehensive nor is it relevant to contemporary life.
Q:  You were responsible for coining the term “Sex Positive” in one of the first college textbooks about human sexuality.  Is there anything positive about the habit of watching pornography?
Dr. Roger Libby:  I’m not sure that’s the way to think about it, but it is certainly not a disease or something to be vilified or condemned. In some aspects, explicit sexual videos can be a sexual outlet for physically handicapped individuals. For others it can provide a sense of contentment and sexual fulfillment and lead to greater sexual variety.  My colleague Dr. David Ley has reported in Psychology Today that as societies have increased their access to porn, rates of sex crimes, including exhibitionism, rape and child abuse have gone down.
Q: You are also a screenplay writer and have written on your blog that porn movies are pretty horrible?
Dr. Roger Libby: From a film critic’s perspective, porn movies are pretty awful. They could be erotic without being exploitative but that is not the direction of the mass market.  As a teaching tool, there was a series of movies produced in the 1980’s called “Better Sex Videos” that were educational even though they were explicit. Were a couple to watch them and discuss them together it could improve their sex life.

The main issue with watching video is that it short-circuits our own imaginations as a mental stimulus. It is a poor substitute for our ability to realize our own sexual fantasies, to bring personal meaning to eroticism rather than just showing a penis and a vagina.  It’s too easy to get bored with that.

Q:  What is the difference between male and female attraction to pornography?

Q:  Speaking of Sex Positivity, one of your colleagues has written a research paper that “VSS” or “ Visual Sexual Stimuli”  has been shown to have improved attitudes about sexuality, led to greater variety in sexual lovemaking, and promoted pleasant feelings of happiness and joy.  Additionally, VSS may provide a legal outlet for illegal sexual behavior or desires. And yet there is a movement among a large number of newcomers in the counseling field that is highly negative and condemning.  What can you tell us about that?

Dr. Roger Libby:  This new crop of self-proclaimed “sex addiction therapists” use a method of treatment that is very similar, if not parallel, to the 12-step program used by Alcoholics Anonymous. What they are missing is that sex is part of us. It is not a chemical like alcohol or drugs that we are putting into our bodies.  To say we are addicted to sex is all wrong.  It’s not sex that is causing the addiction, but the way an individual’s personality is manifesting his emotional or compulsive behavior around sex.

Q:  A 12-Step program is based on the notion that an individual is powerless. They cannot affect change from within?

Dr. Roger Libby:  The problem with the 12-step program is that it is saying essentially that the whole process is beyond your control but if you come to all of our group meetings you are going to kick the habit.  Well, first of all, it’s not true. It might happen that a person will stay away from pornography temporarily because of the peer pressure or group support for staying away from it. But it does not give an individual an internal locus of control.
Cognitive behavioral therapy helps people take control of their own thoughts and feelings so that they do not need to rely on peer group support. They learn how to change their thoughts in the therapy.
Q:  With drug addictions, there typically are symptoms of withdrawal which have given rise to methadone clinics and alcoholic rehab centers.  Is there a withdrawal symptom for watching pornography that would support the addiction argument?
Dr. Roger Libby:  A sex addiction counselor might say there is, but there is no evidence to support it.
Q:  For the sake of argument there have been Sexologists like yourself who have recognized that the body produces certain drug-like chemicals that are associated with sex?  Could these be addictive?
Dr. Roger Libby:  When you are engaged in sexual attraction, or foreplay or are having sex, your body produces dopamine, oxytocin and other hormones that can heighten desire.  That’s not an unhealthy thing. We give off those hormones through stages of excitement from a lot of things, not just sex.  What has happened is that addiction counselors have been desperate to find something to point to other than the obvious factor which is personal responsibility. They are looking at brain functioning and various hormones because they want to take the onus away from the individual and place it on an external agent.
Research into dopamine has suggested certain genetic predispositions toward problem behaviors such as gambling, compulsive shopping,  eating disorders and even sex, along with abuse of alcohol and drugs. If anything, we have become addicted to using the word “addictive.”  Patterns of behavior, from exercise to other habits and rituals, are not addictions, and can be modified, but we must accept responsibility ourselves, not blame outside sources.
Q: What does the treatment plan for compulsive sexual behavior entail?
Dr. Roger Libby:   Unfortunately the wrong treatment plan, like a 12-step program, can create a cycle of dependence that lasts a lifetime. In Cognitive Behavioral Therapy, the treatment plan occurs over a few weeks or months, not years.
It’s time to think differently about our changing world with its freedoms and lurid distractions.  Access to visual sexual stimuli online has changed the way we think about sex and masturbation. So the correct therapy is to change the way we think so we can adapt. It can take a good deal of introspection and vigilance to stay in control. What it does not take is shaming, punishment or  humiliation.”
A multi-million dollar industry has sprung up around treating so-called “Internet porn addiction.”  The “cause du jour’” of a groundswell of anti-porn crusaders has even attracted the interest of national sex therapy associations such as AASECT, the American Association of Sexuality Educators, Counselors and Therapists, which has issued an official condemnation of the sex addiction approach..  This sexual repression, condemnation and persecution is the real danger, says Dr. Libby.

Reading from Dr. Libby to light the way on your loving journey.
Toggle Sliding Bar Area